The clubhouse is an invite-only audio-chat app that has crossed 8 million downloads globally, even after being in a pre-launch mode. New data was recently released by mobile data and analytics firm App Annie.

They said Clubhouse had gained popularity in a concise period of time from 3.5 million global downloads as of February 1, 2021. Now it has reached 8.1 million as of February 16, 2021.

This sharp growth is seen because of the popularly known high-profile guest appearances, including Elon Musk and Facebook CEO Mark Zuckerberg.

According to the reports, the total global installs of around 2.6 million were from the U.S. However, Clubhouse has not shared the total number of downloads officially, but the CEO has revealed the app has grown a lot with the active users. 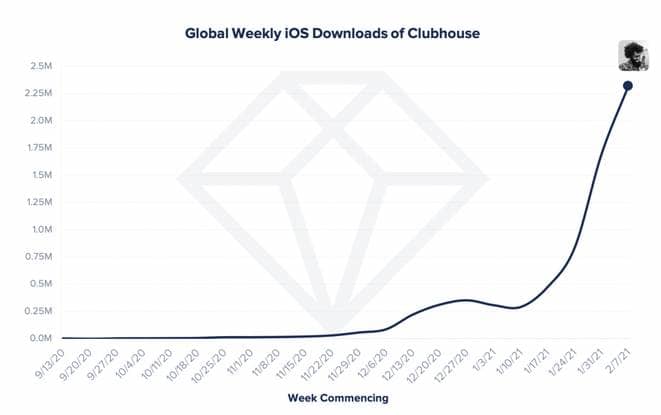 However, the active user count and the registered user count can be higher than the mentioned reports. Apart from Annie’s report, the other estimates have put the user base between 6M to 10M. Unfortunately, the company is officially not submitting the numbers, so we might never know the proper numbers of registered users.

It is worth noting that the app’s installed figures are not valid for registered users as many users download the app but never open it and use it. In this case, it’s different, as it has an invite-only system, so anyone interested in signing and trying the app can use it.

Moreover, reports say the Clubhouse’s appearance is having a huge impact on the larger app ecosystem. The other rivals and Clubhouse offer their own social audio experience and have gained popularity. There are apps like Dizhua, Tiya, and Yalla. All these apps are successful in China, the US, Egypt, Saudi Arabia, and Turkey.

As per the reports, the app Dizhua has 174,000 downloads, Tiya has 6M downloads, and Yalla has 34.5M. However the Yalla app is available since 2016, but it became popular now.