Online controversial sites like gambling entities, spammers, pirate sites, etc., use DDoS-Guard for strengthened security against their infrastructure. DDoS-Guard is a CDN like Cloudflare, which often checks for malicious traffic and thwarts any potential hacks. Thus, it’s a needed guard for every site that’s on the list of law enforcement.

MPA has nominated the DDoS Guard for including in the USTR’s list of notorious sites of 2020, as it provides a haven to the pirate sites. These CDNs are painful to the rights holders and copyright groups since they offer a shield to infringers and slow and often ignore the takedown notices they complain about.

While the DDoS-Guard isn’t included in the 2020’s list of USTR’s notorious sites, it now has a bigger problem to deal with. As per Group-IB, the source code and database of DDoS-Guard is up for sale in a hacking forum. The seller has affixed the price at $350,000 for the whole pack, reduced from $500,000 to lure more potential buyers. 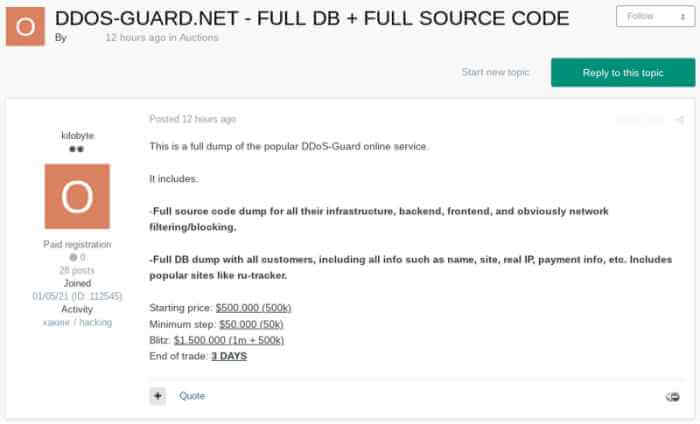 While the offering cannot be verified since the seller didn’t share any samples, he claimed that the database contains identifiable information of several DDoS-Guard’s customers. These may include the details about several pirate sites’ owners too. Also, he specially mentioned the RuTracker operators’ details, a popular and longstanding Russian pirate site.

As claimed by the seller as DDoS-Guard’s customers’ names, IP addresses, and payment information, information is contained in the database. Also, the package includes the source code of the DDoS-Guard’s infrastructure, the post reads.