TechDator
Home News ETTV Officially Shuts Down Due to No Funds

One of the earliest pirate sites ETTV announced shutting down after the funds ran out! The operator tried to sell ETTV to a reliable third party but failed to find one.

Revealing the closure decision, the operator said the site still has loyal uploaders and pulls at least 250 thousand visitors every day. But it’s the maintenance that’s causing him to shut doors, after over 10 years of work in this field. 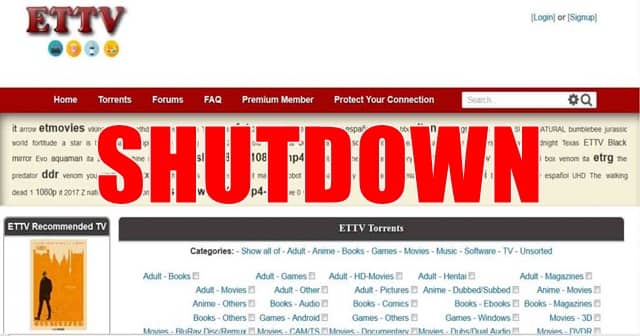 Starting in 2011 as a replacement for ExtraTorrent, ETTV said to have the main aim for releasing the TV shows torrents much faster than EZTV, a popular torrent site back then. As it grew through the single seedbox method, several people and ExtraTorrent owners have given financial support to keep up with the competition from modern pirate sites.

But when ExtraTorrent has voluntarily shut down in 2017, the ETTV and EtHD groups started struggling against the rising completion. Even though the ETTV and EtHD torrents have good reputations in sites like 1337x and The Pirate Bay, it’s still hard for their operators to continue since the financial support was ended.

Things became really hard when the main operator of ETTV disappeared in 2017 and was passed to another named “sidekickbob“. Even though sidekickbob managed the platform for more than two years, it’s just getting hard day by day to sustain ETTV, since the funds have dried up.

And this led to the ultimate decision of shutting down the site, as he revealed to TorrentFreak. To news site, sidekickbob said

“The website is shut down indefinitely. I couldn’t afford to run it anymore. I will not renew the domains. It was a hard decision to make. The site had around 250 thousand loyal visitors a day, and many uploaders were uploading daily since the beginning of it all.”

Before making this anticipated decision, sidekickbob tried selling the platform to a third party for keeping it alive but didn’t find any reliable one to takeover. Thus, announcing the retirement, he said “So Long, and Thanks for All the Fish”.