May Google had some internal error in pushing the update, as the Android maker has just rolled the latest Android 11 Beta 1 update to a few Pixel phones! It was first noticed by XDA’s Mishaal Rahman, who received the Android 11 Beta 1 update for his Pixel 4XL. It has several notable features like new icon shapes, power menu, app suggestions on the launcher, etc. Check out.

Here is a screenshot a tipster sent me. pic.twitter.com/y2i3qBNp9o

Google announced that it’s postponing the Android 11 launch date away from June 3rd, citing the ongoing unrest in the US. But, the firm seems to have accidentally rolled out the first official Beta of Android 11 to some phones already.

As Reported by Mishaal Rahman and later by 9to5google, some users of Pixel phones might have received the update notification, which is of 736MB and titled as RPB1.200504.01 Build version. This has the following features;

These could be the actual notables, as Android 11 furnished the power menu with new options. Upon pressing the power button, the menu of Restart, Screenshot, Power Off, and the Emergency option will be shown down of the screen, unlike the previous right side. Further, this function has a new thing coming up as Cards & Passes.

Under this, as seen below, a Card like pop-up widget will appear on screen where you could set your GPay app, Boarding passes, Tickets, etc, to be accessed fastly. This is just to save time in emergencies.

Pixel gets better by understanding which apps you use the most, and suggest them to be set in your launcher dock for quick access. 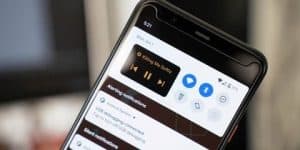 By activating Developer Mode, you can now set, access, and control the Media directly from your notification panel.

You can set Bubble notifications that are similar to Facebook’s Messenger chat bubbles, which hover around the screen to let you view and quick reply to conversations.

There could be many other features coming in ten further releases. But as of now, these are what witnessed by the initial Beta. Google has set the June’s Android 10 Security Patch, yesterday, which, could have probably been confused with releasing the Android 11 Beta 1 Update! The postponed date of the official launch of Android 11 is yet to be announced.