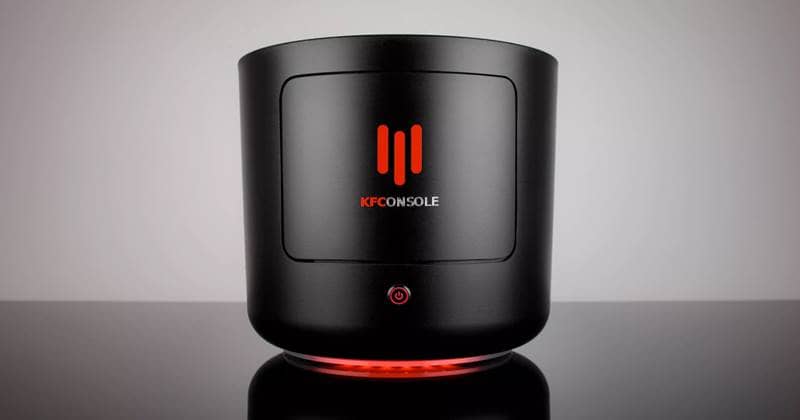 Making the year 2020 more typically, KFC has entered the gaming industry with its new console called KFConsole. This was unveiled by KFC today and is made by partnering with Asus, Cooler Master, Seagate, and Intel. While it’s basically a computer CPU, it’s loaded with powerful specifications to beat PS5 and Xbox performance.

Based on the fact that we love their chicken, KFC has introduced a new gaming rig today, hoping that we may like that too. The fast-food restaurant chain has unveiled a gaming setup named KFConsole, which is packed with powerful specifications.

Shaped like a bucket, it has a special section to warm your chicken while you’re gaming. KFC has crafted this machine so cool with the help of Intel, Seagate, Cooler Master, and Asus. Talking about the design, it has a grill setting over the console for taking air in to cool down the system.

Also, it mended this device to use the generated heat wisely. Since it has set a section for storing chicken (or any other food), the dissipated heat is used for warming the food put in.

The console wars are 𝒐𝒗𝒆𝒓.

Going with the tag of #PowerYourHunger, KFC gaming Twitter handle said the console wars are over, tagging the teaser of its new KFConsole. While there’s no price and availability mentioned yet, it’s claimed to be running high-end games with ease and is relatively better than PS5 and Xbox since it’s a computer rig.

Mocking the competitors, Mark Cheevers, the public-relations and social-media head of KFC UK and Ireland said, “If Sony or Microsoft want any tips on how to engineer a chicken chamber for their efforts next time, they’d be welcome to get in touch.”