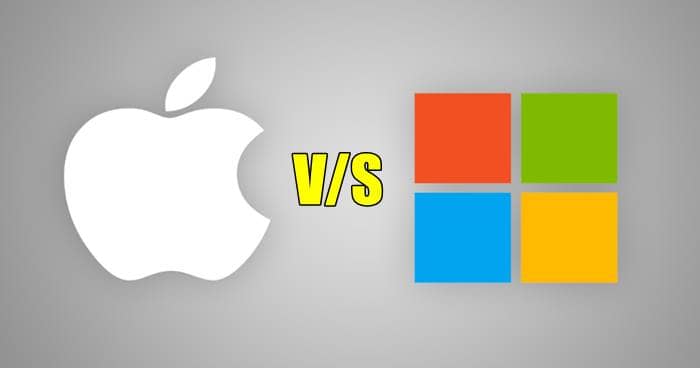 The war between Apple and Microsoft over OS is legitimate, as they’re the two big players in the market. Many have compared this to the fight between iOS and Android, but doing so between software bored everyone. So, Microsoft has tried knocking Apple in the hardware space this time.

The Redmond company has slapped the Cupertino company directly in a new ad video, by comparing its new Surface Pro 7 tablet with Apple’s MacBook Pro. It has gone through touchscreen capabilities, gaming, design etc to determine which book is better. Here’s it;

Initially, the boy in the half-minute video shows both the devices by flipping them up. The walks into saying about Surface Go 7’s touch screen support, and mentions the stylus coming with it for free for precise drawing and pointing. On the other hand, Apple’s MacBook Pro doesn’t support touch screen but has a tough bar at the keyboard to slide things.

Next up is the design, where the Surface Pro 7 has a detachable keyboard, making it as a tablet when removed and as a laptop when attached. This cannot be done with MacBook Pro. Regarding gaming, he boasts that you can run all your favourite apps on Surface Pro 7, but with MacBook Pro, you may not.

This is true because most the apps outside are made initially for the larger ecosystem – Windows and later for macOS. Yet, when it comes to playing games both these devices can only handle lightweight ones with a fairly strong play and sucks at playing high-end ones. After all, both these devices are meant for enhancing the productivity of your work, not gaming.

At last, he halts at the price without speaking them out. That’s because everyone knew Apple products are simply pricier than any other competitive devices in the market. Here too, the Surface Pro 7 starts at $890, whereas the MacBook Pro starts from $1299.