For all those Windows 10 users running after the new Windows 11 update, make sure you have the compatible hardware to be eligible for the OS.

But if you’re still denied after meeting the sufficient hardware requirements, you’re not alone. Microsoft acknowledged an issue where several eligible users were denied upgrading to Windows 11 in the Windows Update center. And a fix for that is coming.

Over the years, Microsoft pushed the hardware requirements for upgrading to a new Windows OS reasonably. But with Windows 11, the maker strictly mentioned having security features like TPM 2.0 and Secure Boot, alongside the general RAM, storage, etc., requirements.

Also Read- 5 Important Things You Should Know About Windows 11

This is because the company considers security an essential element of the new OS and doesn’t want its users to compromise on it. So while most old PCs were left behind, new and recent PC users enjoy the benefits of Windows 11.

But, there are reports pertaining that few eligible Windows 10 users are denied of receiving the Windows 11 update, saying an error as “This PC doesn’t currently meet all the system requirements for Windows 11. Get the details and see if there are things you can do in the PC Health Check app”. 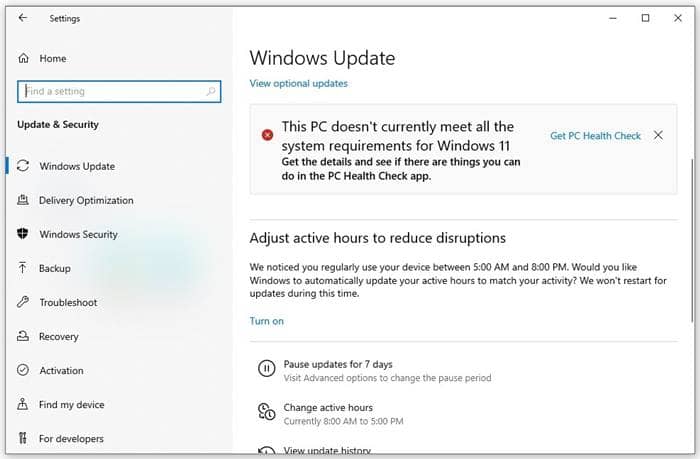 Still, such users can use the Media Creation tool or an ISO image of Windows 11 to install and proceed. So there’s nothing to worry about yet. But, it’s the primary section where users reach for a new OS update – Windows Update center – which has an issue checking the compatibility.

Thus, after several people reported in Microsoft’s Feedback Hub, the company noted the issue saying, “We are aware of the issue, and we’re currently working for a fix.” So you may wait for Microsoft to fix it or force install Windows 11 carefully after meeting the requirements.