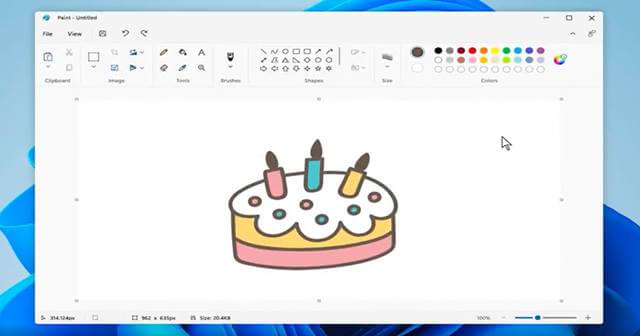 Microsoft’s head of Windows and Devices, Panos Panay, has just shared the new looks of the Paint app in Windows 11.

While there are no new features introduced, Microsoft slightly improved the looks of the existing tool and few functions. For example, the Paint app on Windows 11 now has a new brush menu, text box, and color picker icons. This is said to be rolling to Windows Insiders soon.

Apart from few new functionalities, Windows 11 is all about new looks and design. However, the maker, Microsoft, stresses UI to make users believe the Window still has the scope and is intuitive.

While a stable rollout of Windows 11 is still a couple of months away, interested users can already experience most of its features in the Windows Insiders program.

Now, it’s time for the legacy Paint app teased by the Windows and Devices head, Panos Panay, from Microsoft. As per his tweet, the Paint app window in Windows 11 has curved edges and few design changes within.

These include icons updates with minor functionality changes. For example, adding a text box at the app header now shows all its editing tools in a ribbon format instead of talking to a new tab like in its previous version.

On the other hand, the brush menu opens in a grid format with all types of brushes available for use. This includes showing a glimpse of how the brush works too. Further, the color picker now has circles instead of square tiles.

All these should hopefully motive users in Windows 11 to work on it, as Microsoft had already faced a disastrous experience with Paint 3D – and closed it since lack of usage. The new Paint app in Windows 11 will soon come to Windows Insiders for trying.