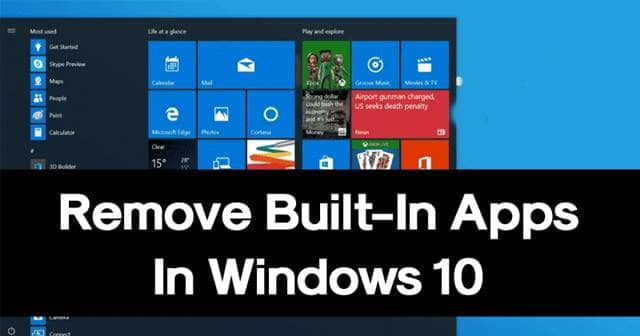 Hoping their users will take advantage of all its resources, Microsoft has set several apps in its Windows 10 OS. Though most of them are useful, not all users are interested in trying them all. And if you are one of those vexed users who wanted to dump such useless apps and take offload from the computer, here’s how’s to do it;

We use an in-built tool called PowerShell to delete the default apps, which would otherwise not be removed from the system. PowerShell is a configuration management framework that removes the default apps from Windows 10. Here’s how to do it,

Also Read- How to Delete a Drive Partition in Windows 10

How to Remove In-Built Apps From Windows 10 Using PowerShell?

1.) Open PowerShell as administrator on your Windows 10 PC. For this, go to Start Menu and type Powershell to check the top results saying Windows PowerShell (x86). Click on it to open the PowerShell.

2.) Here, type the following command to get all the apps available on your Windows 10 PC

3.) Also, to get all the users in your system, type the following command,

4.) After finding all the applications and spotting the ones you wanted to remove, you have to copy/paste the package name after the argument as below,

For example, selecting Microsoft’s OneNote to be removed, you’d do as follow,

That’s it. You’d see a successful notification shown right above in the PowerShell console. While it’s not recommended to tinker with your system’s default settings without proper knowledge, taking off unused services can sometimes offload the work from your PC.