TechDator
Home News Reports: WhatsApp is the Most Downloaded App in November 2020

From the latest Sensor Tower reports, an app analytics company, WhatsApp, is ranked with most downloads in November 2020. While this being in the first place, TikTok, Facebook, Weather, and Radar USA, and Instagram ranked in the next top 5 places. Here are more of these analytics;

Sensor Tower, the analytics company tracking the popularity of apps, has released a report where WhatsApp is the most downloaded app in November 2020. It tracks only the apps that are freshly downloaded and not the ones pre-installed. Based on this, here are the results.

WhatsApp ranks top in the overall downloads with over 58 million installs in the last month alone. Most of these came from India, with over 30% downloads, and Nigeria at second, with 10% of downloads. This feat helped WhatsApp to takeover TikTok in the chart after months of dominance. 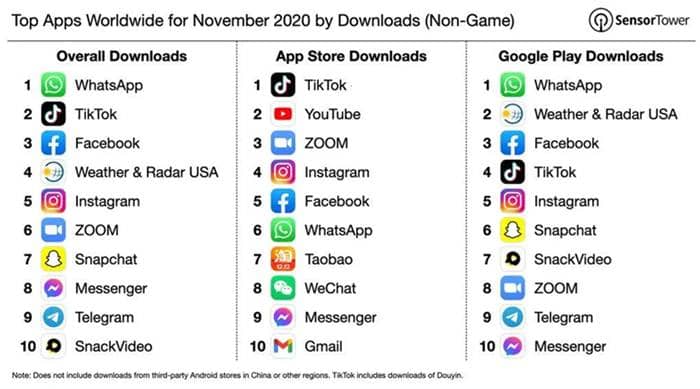 The second place is held by TikTok, which also included Douyin. Douyin is just the Chinese version of TikTok, with the latter being renamed for global markets. These apps combined had about 55 million installs, with over 85% contributed by Douyin only!

The US and Turkish markets, where it’s named as TikTok, has contributed about 8% and 2% of revenue, out of the total $123 million generated.

The next place is taken by Facebook, which also got the most downloads (about 12%) from China and Brazil (about 10%) last month.