TechDator
Home News US Consumers to Spend More on OTTs Than Pay TV For the...

A new report from Strategy Analytics revealed that US consumers would eventually rely much on OTT platforms than regular Pay TV. This was depicted in a statistical analysis, where the spending on on-demand streaming services will surpass legacy Pay TV in 2024, as more and more consumers are willing to cut the cord. Also, it’s revealed that over 82% of Americans have OTT subscriptions.

It’s true that on-demand streaming services like Netflix, Amazon Prime, Disney Plus, Hulu, etc., are growing rapidly. But, at what pace? Analysis from Strategy Analytics revealed that spending on OTTs increased by 34% last year, bringing the total amount spent on them to $39.5 billion. Whereas the amount spent on Pay TV is even higher at $90.7 billion, but it’s losing its charm after all. 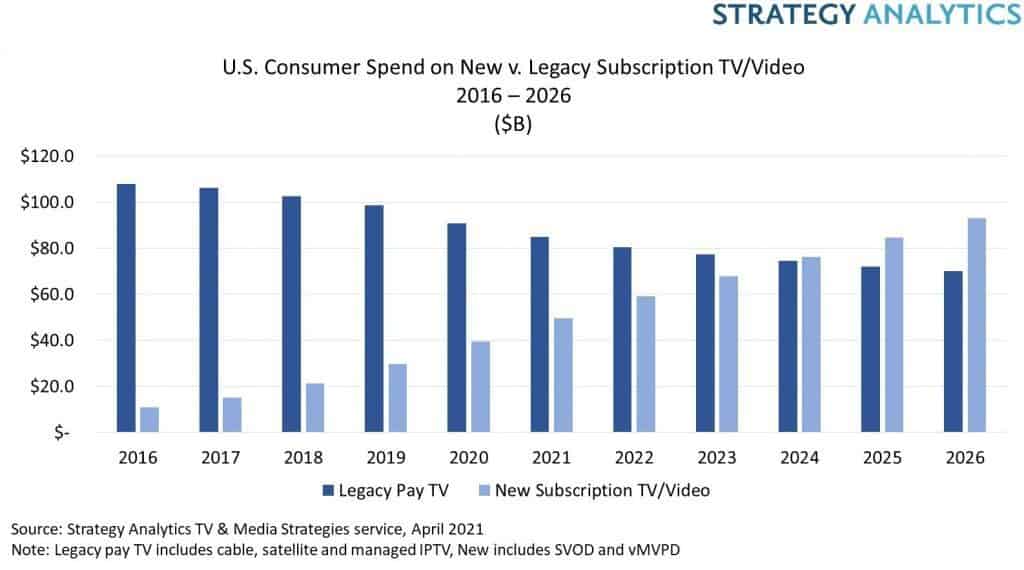 The same report records consumers’ shift from regular Pay TV to OTT platforms in recent years. And with Pay-TV subscribers spending less (reduced 8% last year) gradually, we may see the closure of that chapter soon. Also, analysts reported this surpassing breakthrough would occur for the first time in 2024.

Consumers’ spending on Pay TV is expected to reduce to $74.5 billion in 2024, whereas the spending on OTTs will be increased to $76.3 billion. Also, another survey reports that over 82% of Americans have paid subscriptions to various OTT platforms, with an average of 4 subscriptions. At the same time, the Pay-TV subscribers constitute just 67%. Thus, the shift is imminent.

We’ve recently seen the OTT platforms like Netflix, Amazon Prime, etc. are spending lump-sums on content streaming rights. Many have partnered with popular media networks to stream their content on their platform and production houses to are more willing to sell their movies and TV shows to OTTs after their theatrical run.