Whatsapp is preparing to bring the Face Unlock feature on Android. In recent news we have seen there are many new features coming to Whatsapp like Mute groups, snapchat as messages disappear, and much more. Now, this is another feature that is in the beta phase of testing. 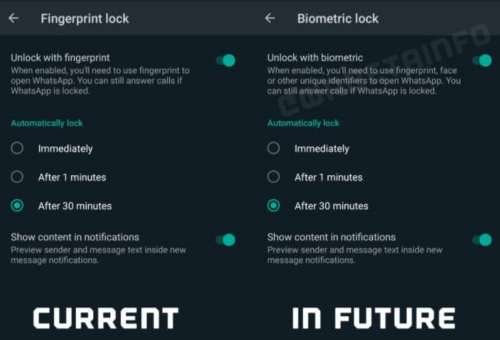 Whatsapp is one of the most used messaging platform used by billions. It is free to use and has great features that we don’t need to explain, as everyone uses this app. It regularly gets updated and we already know about the new features coming to it.

Now, according to the reports on Xda developers, Whatsapp has added fingerprint support for unlocking. With this feature, Android users can easily lock and unlock the app. But those Android devices which have face unlock support cannot use this feature.

So, for such devices as Google Pixel 4 which has a special sensor for 3D facial recognition Whatsapp is bringing the support of the face to unlock feature. Once this feature is ready, the “Fingerprint Lock” will be renamed as a “biometric lock”.

This new setting will be based on the BiometricPrompt API of Android. It will allow the apps to use face scanners and fingerprint sensors for authentication. However, the feature is not ready yet, so we can’t tell you when the feature will be available. It is in the latest beta release. But, we can expect it will be coming soon.

Moreover, Whatsapp is also bringing a feature like Skype and Zoom where one can join the ongoing calls even if you have missed. This means when you are busy and can’t join the video or voice call you can join them later when the call is still ongoing.

However, the Face unlocking feature is already available on iOS, as back in 2017, iPhone X introduced FaceID. As all the Android devices do not have face-scanning support, so it is unclear how many devices will get this support in the upcoming update.