Microsoft has updated its touch keyboard on Windows 10, where it added emoji search, GIF support, clipboard history, etc. The pop-up on keypress and sounds are revamped with a new design based on Windows Fluent Design. While it’s good for surface tablets, it’s available for all Windows Insider users as of now, and maybe rolling out to all in early 2021.

Microsoft is making its touch keyboard a lot better for typing. In its new update, Microsoft added support for GIF animations to the keyboard, which can be seen along with emojis by pressing the Windows key + period (.) at once. Users can also see their clipboard history through the options. 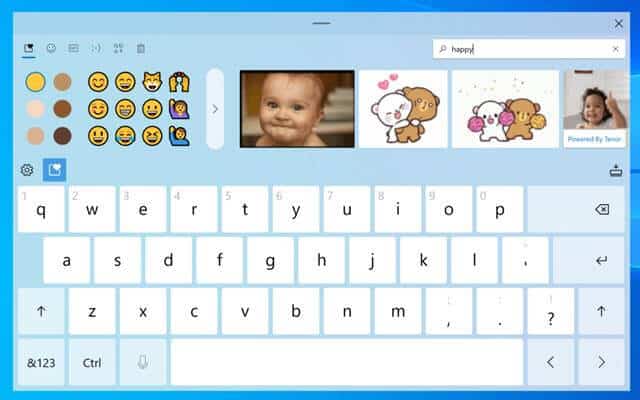 Though emojis are available in previous updates, Microsoft has added a Search option for them now. While this makes it easier for searching through favorite or relevant emojis, the support for GIFs is appreciated. Further, you can see both these alongside the clipboard history all at once. Microsoft has even added a feature to move the cursor using the Space button.

Just like we’ve seen in SwiftKey’s latest update, users can now move their cursor in a sentence by swiping on the Space key. To activate this, press and hold the Space key to turn that as a touch cursor. Besides all these, Microsoft has updated its Voice typing feature to be more sophisticated.

Microsoft says to have updated the backend, got the better design, and added auto-punctuation for its Voice typing for taking the dictation even more accurately. All these features could better be utilized if you’re using the touch keyboard on Surface laptops or tablets since they’re coming with Window’s 10X.

All these improved designs and layout was based on Windows 10X, which Microsoft calls as WonderBar. This is available for Windows 10 Insider users, which is free to join. Regular users can see this in the first of 2021 rolling to them as an official update.