Antimalware Service Executable is a crucial element of Microsoft Defender which provides the system’s ultimate safeguard from virus and malware attacks.

Everything about the new generation Microsoft Defender and its component are good until it chews all CPU power. Here’s a look at what is Antimalware Service Executable and why it is running on a high CPU.

What is Antimalware Service Executable and How Does it Work

In 2006, Microsoft Defender first came out as antivirus software for Windows 7 and other editions. Formerly it is also known as Windows Defender in Windows 10. Therefore, it becomes a ritual to provide this antivirus app in every edition of Windows to defend your system from viruses and malware as today’s Microsoft Defender.

There is no way left by Microsoft to make an excuse for the matter of security. Even if you are deactivated Windows Defender, the system will ensure activation. Moreover, the adaptability of Microsoft Defender with Windows 11 is simply remarkable.

All thanks to Antimalware Service Executable, which runs behind the Microsoft defender that solely works to protect the system from unwanted threats.

You can see its progress in Task Manager. It is situated as Antimalware Service Executable in the processes tab and MsMpEng.exe is the name in the details tab.

If you want to check the status of current threats and virus protection status on Microsoft Defender. Here you need to follow this path:

Why Does It Take High CPU Usage

It is as simple as calculating two plus two. It scans all your files and software in the background to monitor any suspicious malware or virus threats.

However, it does not scan only your files and software but also its files. Therefore, it eats up all CPU to provide comprehensive details. When it runs on a high CPU, you may face apps crash, lags, hang, and other issues.

In this contrast, it is perfectly fine to take CPU or another resource to provide a complete virus scanning. Inconveniently, you can’t use your system when all CPU energy goes into Microsoft Defender. One of the best practices is scheduling the scanning process to accomplish everything systematically.

Is It Possible to Disable Antimalware Service Executable?

An antivirus tool is always good for us and the system, especially a powerful free tool like Microsoft Defender. Even though it sucks all CPU power at a time, it is important to keep it until you haven’t opted for other antivirus tools.

There is no way to disable it permanently. Yes, you can give some rest for sometimes to it. Microsoft Defender is very smart and has to be in reality to protect the system.

Even if you turn it off, after a while, Microsoft Defender will kick off its usual rhythm if it is unable able find any other antivirus tools installed on your system.

However, the misconception around its disable has a hype on the internet; you can’t disable it, and even stopping for a while won’t help, as I stated before. The only way to get rid of it is to install other antivirus tools.

If you are considering using Microsoft Defender along with a third-party antivirus tool, Windows still allows us to do. Just enable its periodic scanning toggle whenever you think you might need it to scan. Technically, you will get another layer of security. 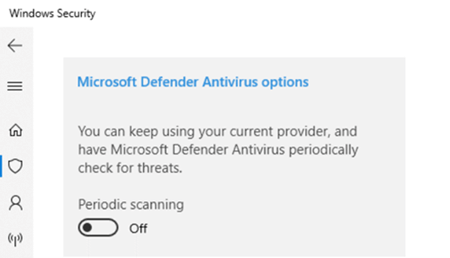 Microsoft Defender is a precious tool to have on the system. As it has grown stronger and more powerful. It may consume CPU and other resources, but always worth keeping it.

Should I Stop Antimalware Service Executable

As long as security is concerned, I recommend you not stop its service. Because over the years, Windows Defender remarkably enhanced its capability and proficiency to protect your system.

Moreover, it comes with the operating mechanism itself. Another big talking point is that you get this powerful tool for free. Unless you switch to other third-party software, you should rely on it.

I think you have got fair information about what is antimalware service executable and why it is running on a high CPU. We cover all the popular queries related to it. Still have a question on your mind, don’t hesitate to ask in the comment.