DuckDuckGo, the privacy-focused browser has reached record levels of usage by the community, as per the latest statistics. It’s said to be grown by over 46% in 2021, by processing over 100 million search queries a day.

Though the browser’s usage has been grown, DuckDuckGo still possesses a small percent of search-engine market share, with Google and others taking a significant part. So to lure more people into its ecosystem, DuckDuckGo has introduced new privacy features this year, and coming with a desktop browser app.

For long, search engines like Google, Yahoo and Bing have dominated the online search markets, amassing a large amount of user data. This in return is processed heavily to profile them according to interests and show them targeted ads.

As this practice exploits privacy, may have advocated for tracking-free options for surfing the internet. And things like DuckDuckGo and Tor were risen out of such requests. DuckDuckGo, in special, is now a mainstream search engine that claims to respect user privacy by not tracking their online preferences.

While it still relies on ads, they’re not targeted as they don’t gather specific user data. This stance attracted the privacy-centric users who started using and referring DuckDuckGo to everyone they find. And the results are now showing up significantly.

As per reports, DuckDuckGo in 2021 is processing over 100 Million search queries daily, up from the 79 million mark in 2020. The total number of search queries stands at 34.6 billion this year, up from 23.6 billion, depicting a record growth of 46.4%. 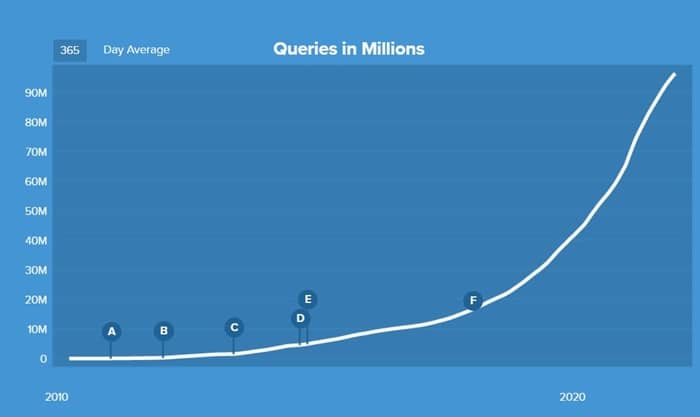 Though it’s now extensively growing popular, the market share it possessed stood at a mere 2.53%, with giants like Google taking over 87% of the search market. Other significant players like Yahoo and Bing have 3.3% and 6.43% respectively, in the USA region.