Habana Labs, an Israel based AI processing firm acquired by Intel last year, had its data leaked after stealing from a cyberattack. Threat actors behind this incident were identified as the Pay2Key ransomware group, who were linked to be Iranian hackers, and attacked several Israeli firms earlier.

Intel acquires Habana Labs in 2019 for about $2 billion. This is aimed at helping Intel in handling the workloads in its data centers. The company is now revealed to be attacked by a ransomware group named Pay2Key, who had leaked the stolen files from the breach. 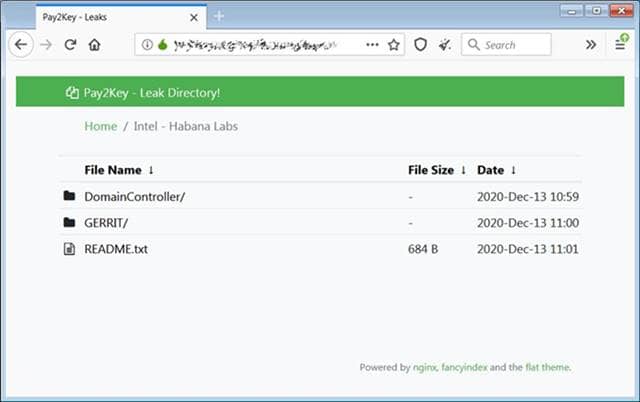 As reported by BleepingComputer, the leaked data of Habana Labs contained details regarding the Windows domain account, DNS zone data, and a file listing from Habana Labs’ Gerrit development code review system. Further, the dump also has images of the source code and some business documents.

In the data leak site, the Pay2Key group mentioned that Habana Labs has “72hrs to stop the leaking process.” While it’s currently unknown what’s being demanded from the victim, experts believed that this attack was meant to cause havoc in Israeli interests rather than creating any revenue.

This week @_CPResearch_ released an analysis of ransomware targeting Israeli SME dubbed "Pay2Key". Using intelligence sources and our latest CryptoCurrency monitoring capabilities, we have been able to track the exit strategy of the threat actors leading to Iranian exchange. pic.twitter.com/64WzsonAjQ

In question, the ransomware group is also responsible for other Israeli firms in the past, like one on Amital, Israeli shipping, and cargo software company hit last week. Profero, an Israeli cybersecurity firm, has linked this to the Pay2Key group after matching the IOCs in investigations.

Researchers linked this group of operators to be run by Iranian hackers. This is based on the linkage found between Bitcoin ransom wallets to Iranian cryptocurrency exchanges. Since then, experts warned Israeli firms to tighten their network security to avoid falling prey.