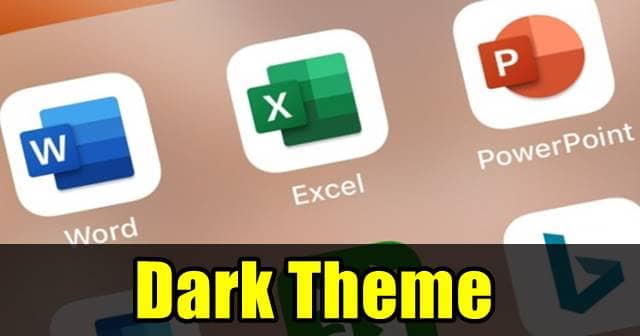 After bringing dark themes to OneDrive and Outlook, Microsoft is now adding the same for its rest of Android Office apps and the Office Hub. Alessandro Paluzzi, who has earlier leaked unreleased features of many other apps, found this. Eventually, when the update is rolled out, users will choose between Dark, Light, and a System Default theme.

Dark Theme is an essential feature in every app today. As many users started demanding this for their vision’s sake, developers add it by default or pass it in a future update. Microsoft is doing the same, as it’s now rolling dark mode to its Android suite of Office apps.

ℹ️ Here are some screenshots of what Microsoft Word will look like, but it will also look the same for PowerPoint and Excel. pic.twitter.com/omuVIqkmub

As reported by Alessandro Paluzzi, a reverse engineer who earlier leaked features in Instagram and many other apps, Microsoft will add the Dark Theme in its Android Office clients, including all the productivity apps like Excel, PowerPoint, and Word. Microsoft Outlook and OneDrive have this theme already in them.

Along with the Android Office suite, Microsoft Office Hub will get this update, as Alessandro reported. From the screenshots of Microsoft’s Word he shared, the editor has been turned dark when the theme is switched on, but the document remained white.

He is firm that Microsoft will add support to turn the documents too dark when the update is officially rolled out.

While it’s unclear when the update will be rolling out to Android users, it will let users choose between Dark, Light, and System Default themes when released. And if you’re not a fan of Microsoft’s suite of apps and wanted something lighter with almost similar features, try Google’s suite of productivity apps. These include Sheets, Docs, and Slides, all having the dark mode for so long.