An unknown bug in the January 2022 security update is breaking down connections to the Windows VPN clients. This is affecting both Windows 10 and Windows 11 devices.

The connections are specially blocked to L2TP VPN devices, which are updated to this month’s Tuesday update. As there are no workarounds yet, system admins are forced to uninstall the recent update to make L2TP VPN connections work.

As per reports, Windows 10 and 11 users who have updated their systems to the latest security update from Microsoft – the January 2022 Tuesday update, are facing connection issues to their Windows VPN clients.

The Tuesday security update contains KB5009566 for Windows 11 and KB5009543 for Windows 10 2004, 20H1, and 21H1. An unknown bug in them is now creating rucks among the Windows community, as it’s barring them from connecting to their L2TP VPN connections. When tried, it’s showing an error as below; 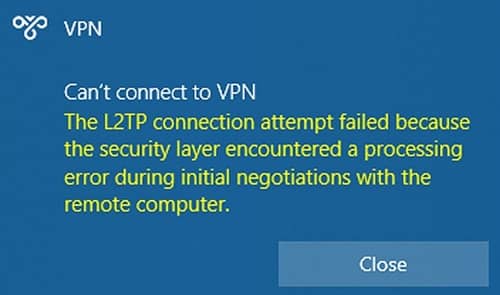 Checking the Event Log shows entries with error code 789, dictating that the connection to VPN is failed. And from public sources, the unknown bug seems to be affecting only specific VPN clients. For example, as per a Reddit thread, a few system admins reported seeing errors with their SonicWall, Cisco Meraki, and WatchGuard Firewalls connections.

Microsoft hasn’t acknowledged it yet, so expect a fix to come late. And sadly, there’s no workaround too! All you can do is roll back to the previous version, from the settings. Or, by following the below commands with elevated (with admin privileges) command prompt;

Keep in mind that uninstalling the update will unhook the patch, which comes with several fixes for known and unknown vulnerabilities. Microsoft stated that it fixed over 96 security vulnerabilities in this month’s Tuesday update, so rolling back will make you vulnerable.