Leaking insider information is illegal but excites the community anyway. An artist who worked for Activision has leaked the PS5 System UI after he was treated unfairly, probably.

He claims to have worked on the PS5 UI making since Sony has approached Activision, along with the deal of Call of Duty. As per his leaks, the new console has new options showing up, but still following the same old design of PS4.

Unfairly terminated workers often try to avenge their company (or those who’re responsible) in one way or another. Out of all, leaking their personal information is a critical hit.

In one such incident, an artist from Activision, the one who publishes Call of Duty, has come out to leak details about the Sony’s PlayStation 5 System UI.

He claims to have left jobless and homeless because of Activision, and decided to leak what he was working on. 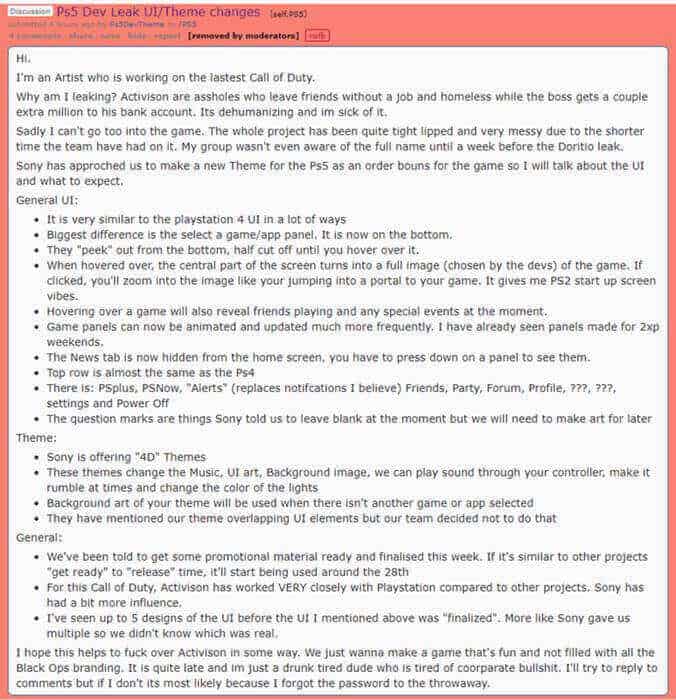 He says Sony has approached Activision for designing its PS5’s system UI, as an added order besides the game Call of Duty. And since he worked on that project, he detailed some details of UI in a Reddit post, which was now deleted by the moderators.

Yet, a screenshot taken before that tells everything. According to his post, the PS5’s UI design will be more like the previous PS4, with slight changes. A “Peek on hover” option is available to check what your friends are playing when the selector hovers over the icons.

Further, the leaks also reveal users can play music from their DualSense controllers! Also, rumble at times and even change the colors of lights.

The News Tab is slid down, and users have to press the home panel to check it. A range of new options is set on the home screen as PSPlus, PSNow, Alerts, Friends, Party, Forum, Profile, etc. Since nothing of this is official, we remain active to see confirmations soon. Until then, we hope these changes won’t be spoiling the mood.