Truecaller has released this year’s report of “Top Countries Affected by Spam Calls,” They have new names in the top 10 list. While last year’s nations like the USA, India, and some South American nations have fallen in their ranks with a decrease in spam calls, new nations like Hungary, Poland, Spain, etc., have shown up in the top 10 list.

Most Affected Countries by Spam Calls

Spam calls are unwanted and annoying, and so are spam messages. Truecaller is doing a great job in notifying users about such calls, with detailed metrics. It’s also releasing a yearly report detailing the most affected countries’ stats with such spam calls. In that pursuit, it released this year’s report too.

In this, Truecaller claims to have identified 31.3 billion spam calls and 145.4 billion unknown calls in 2020, increasing 18% and 25% compared to last year. They said the decrease in this activity in March to April, because of pandemic lockdown, where scammers too took a break.

This started rising again in May and continued as usual thereafter till October. Truecaller’s report detailed stats of affected countries with spam calls from January to the end of October this year. And this list is again topped by Brazil, which has increased 9% spam calls than last year. 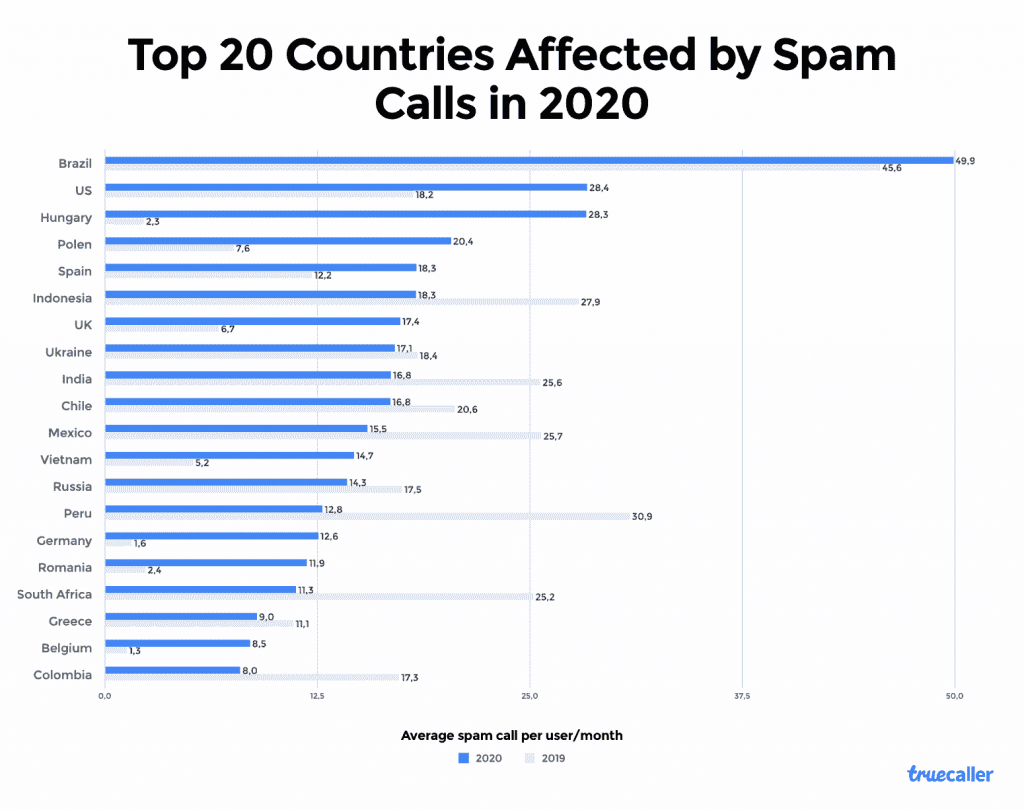 The USA follows this in second place, which recorded a 56% increase. Hungary, Poland, and Spain took the next three spots, first-time entrants into the top 5 list. Further, UK, Germany, Ukraine, Romania, Greece, and Belgium have been listed in the top 20 ranks.

Last year, with the combination of Chile, Peru, Brazil, and Colombia, the chart was filled mostly with South American nations. Asian countries include Indonesia, India, Vietnam, and Russia, were on the list too. While Indonesia has risen in rank to 6th, India has dropped to 9th.

At last, Truecaller assured that its statistics were made based on anonymous readings, and they never looked into any of the messages or calls. Alongside the 145 billion spam calls, it has also identified 13.8 billion spam SMS globally.