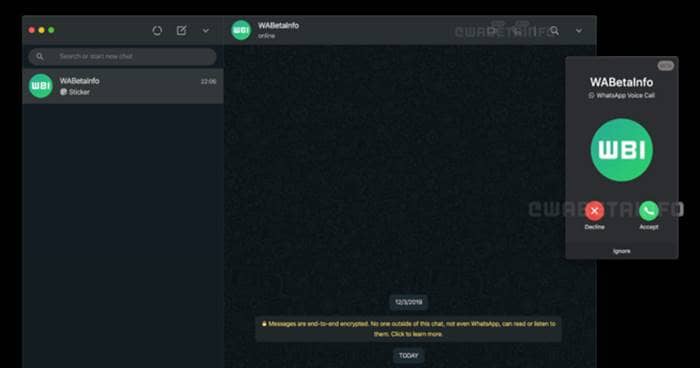 Confirming the leaks from a couple of months back, WhatsApp is seen testing voice and video calling support in its desktop and web versions. Selected users will see both the calling options at the chat header, which will pop up with a small window when enabled. Since in beta, it may roll out to everyone soon.

Users have long been asking WhatsApp to bring video calling support to its web clients since it makes life easier. The Facebook-owned instant messenger has to support both voice and video calling in its mobile clients for a while now and is getting this support for web and desktop clients now.

This was initially seen in October this year by WaBetaInfo, by finding some strings for their feature in the desktop app code. Now, the same source confirms the feature as it seen support rolling out to few selected users.

Also Read- How to Enable Dark Mode on WhatsApp Web

While we wait until this rolls out to everyone, we hope this feature will be well received when shows up. After all, voice and video calls have become so essential these days, mainly due to the push given by the COVID-19 pandemic.

Clicking on either of the callings opens a pop-up window showing details like the call receiver’s photos, name, end button, mute, and other options buttons. In case of receiving a call, a large pop-up window with the same options would appear, with a video if it’s a video call.

It’s currently unknown whether it supports group calls or just in the one-on-one chats. WhatsApp has increased the limit for the number of participants in a group video calling to eight this year considering the demand. The same is expected for web clients too if it wants to stay in the competition of video calling apps.