TechDator
Home How To How To Stop YourPhone.exe Process in Windows 10

Windows 10 is a famous operating system used by many users, including professionals. Microsoft keeps upgrading and adding new features in the Windows 10 OS with every new update. Not only that, but Microsoft also adds a lot of useful apps to Windows 10 that enhances the user experience.

Some of these apps keep running in the background and consuming a little memory without any uses. In this article, we are going to inform you about one such app process named YourPhone.exe and also tell you how to stop it if you don’t want it.

A few weeks ago, I was checking out the background process running in the background of my Windows 10. A process named YourPhone.exe took my attention. If you’re also facing the same issue there here is how you can turn it off.

What is the YourPhone.exe process in Windows 10

YourPhone.exe is basically a background process started by a UWP app named Your Phone. This UWP app is included with Windows 10 1903.

Your phone app enables users to sync photos across Windows 10, Android as well as Apple devices. In addition, a user can also utilize their Phone to send SMS texts from the Windows 10 desktop and laptop. In short, your phone app integrates Windows 10 with Android or iOS mobile devices.

Is YourPhone.exe a virus, or is it a threat to your PC?

The simple answer is No, This is a Windows app, and it has no effect on the security of your PC. Yes, it is not a threat to your PC, but it uses a little ram, and if you have a low-end pc, then you might want to remove it.

We also advise you to just terminate the YourPhone.exe process because it consumes RAM, and if it is not useful for you, there is no need to keep it running.

How to Stop YourPhone.exe Process

Follow the below-mentioned steps to terminate the YourPhone.exe process.

1) Go to your search box or use Cortana and search for Background apps. Click on the first option from the search result.

2) Doing so will open a new window on your screen. You will see all the installed app list that is running on your pc.

3) Scroll down and look for your phone app on that list. If you can’t find it, you can also use the search box to search for yourphone.exe app. 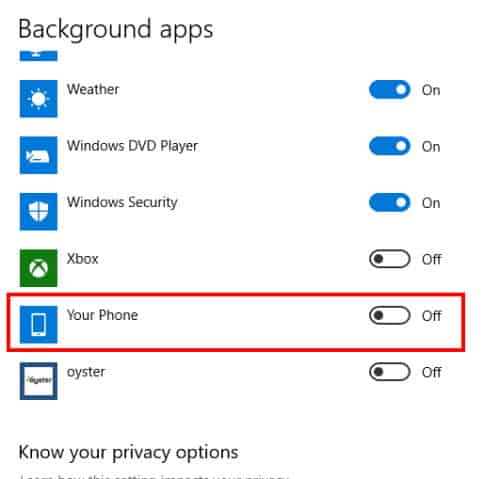 4) You will see an On-Off switch on the left side of the App name. Toggle the switch to off the YourPhone.exe app.

5) That’s all, now just close the setting and restart your pc and the YourPhone.exe will be turned off.

YourPhone.exe is nothing but a simple background process started by a UWP app. You don’t need to worry about it as it is not going to affect your PC. However, you can always turn it off using the process we provided.

We suggest you turn off any useless process and all the UWP app process from the background to save up RAM. You can use Google to look for a list of UWP apps and disable them on your pc. I hope this article provides you with all the information you need on YourPhone.exe process.