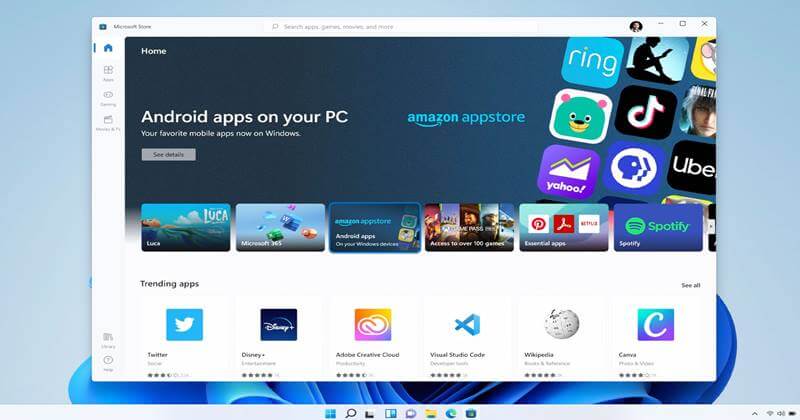 After a series of leaks and tips, Microsoft has finally revealed the Windows 11 – its next-gen desktop OS having considerable design and productivity features.

Among all those, what surprised us the most is the support for Android apps on Windows 11! In partnership with Amazon, Microsoft will let you use Android apps available in Amazon App Store on your system. These will be running in a container and flexible in most cases.

With the number of users increasing using both their smartphone and desktop for daily uses, bridging a gap between these two is the need of the hour.

With this in mind, Apple has recently announced support for using iOS and iPadOS apps on macOS, which should ease the workflow of Apple users. Following in the similar suite now is Microsoft, which announced similar support.

In today’s Windows event, Microsoft revealed much-needed support for Windows users – the ability to use Android apps on their Windows 11 OS.

In close partnership with Samsung, Microsoft had only let Samsung handset users handle their Android apps on Windows 10, through Your Phone, with numerous limitations.

But now, it’s offering better support for running Android apps on Windows 11, through a partnership with Amazon App Store, via them available right through Microsoft Store.

Android apps run as regular apps thanks to Amazon. Though this download process sounds a bit wonky, at least at first: pic.twitter.com/qELV0fhRMc

What’s more good is that – these apps can be pinned to the taskbar, resized, and snapped – making them feel like a regular Windows app. Yet, these will be running in a container and are powered by Intel Bridge technology.

While the above attribute to advantages, the downside of this support is the partnership with Amazon, Windows 11 apps will only be the ones available in Amazon’s App Store, which are so limited compared to Google’s Playstore.

And it’s unlikely that Microsoft will be shaking hands with Google in this case, so we won’t be seeing Google Mobile Services coming to Windows 11. Thus we may experience frequent misbehaving of apps due to lack of Google Play Services.